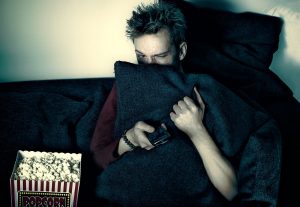 13 terrifying horror movies that you won’t dare to complete.

Sky-high pulse, cold sweats and a strong feeling of panic. Watching horror movies is a wonderful experience! We list 13 horrors that keep high quality and will scare you immensely. Oftentimes, we get to hear about movies that are supposed to be really scary, but in reality, aren’t. In this post, we will actually list extremely scary horror movies.

So here you go – here is our pick of the top films that will scare the hell out of you.

After a one night stand, teenage Jay is pursued by a mysterious and invisible creature that leaves dead bodies in his wake. The only way to get rid of “It” is to have sex with someone else. You who like the 70s and 80s slasher movies will appreciate the nostalgic photo and music.

The movie that started the horror movie trend with “found” material filmed with shaky hand cameras and surveillance cameras and became an incredible success. We follow three film students as they head into the Maryland woods to make a documentary on the Blair Witch legend. The deeper into the forest they go, the more strange things happen until the filmed material is the only thing left.

A Spanish horror that also uses the documentary style here – but with zombies instead of witches. Think “The Blair Witch Project” meets “28 days later”. A reporter and photographer go with the rescue service to an apartment building. They soon become trapped together with the residents and some terrifying creatures. A large part of “REC” is filmed with a dark look and the last ten minutes are really scary.

Quite frankly – we can’t choose between the two films. Both are really good, worth seeing and will make you sit with your heart in the throat pit. The films are based on real cases that the paranormal investigators Ed and Lorraine Warren took on in the 1970s. In these films, we also get to meet one of the scariest horror characters there is – Valak.

A spin-off on “The Conjuring” films. The first Annabelle movie left some to be desired, but the other keeps the measure – and frightens you away. After their daughter dies, a dollmaker and his wife start an orphanage for girls. But the girls are soon terrorized by an obsessed doll.

A group of friends embark on a cave expedition and slowly notice that they are not alone down in the dark. If you are not already claustrophobic, you will learn it after this movie. “The Descent” does a good job of building a quirky and panicky mood only with the help of narrow passageways and rocky roads. When the monsters finally show up, you are already sweating through stress.

The 2002 American remake is the easiest to get, but the original Japanese version is actually the scariest one. Journalist Rachel investigates the story behind a VHS tape that seems to be the reason why people die within a week of seeing it. I promise cardiac arrest if the phone rings after you have seen the movie.

Available as a German model and American remake. A family is held hostage in their idyllic summer cottage by two psychopaths who force them into increasingly horrible things. There are no monsters, zombies, ghosts or demons here. Only people’s evil.

A mother tries to deal with her son’s fear of a, what she thinks is invented, monster in the house. She later discovers that the monster may not have been completely invented and notices a threatening presence in the house. A film with strong Freddy Krueger vibes that has frightened people around the world.

Perhaps the biggest horror movie of the 2000s made with a minimal budget and surveillance camera style. In the first film (of six pieces), a newly moved couple discovers a demonic presence in the house. The way it is filmed makes the movie feel uncomfortably close like it could happen to anyone.

Two girls who lost both their parents and lived alone in the wilderness for several years are taken care of by their uncle and his wife. However, the children are plagued by a supernatural spirit they call “Mama”. Creepy and strange children are always grateful for material in horror movies. Combine it with Spanish flair for the genre and you have a top movie.

A family is plagued by an evil spirit that puts their son in a coma. They soon learn that the boy can separate his consciousness from his physical body and is held captive in another, astral dimension. A movie with a really good and surprisingly original act.

There is a reason that many older, classic horror movies are not on this list. It is not because they are bad, on the contrary, many are very good. It is rather that much that was considered scary in the 1982 movie does not feel as scary today. We have become accustomed and doomed. An older film that, on the other hand, still measures when it comes to the horror factor is “The Exorcist”. The story of a teenage girl who becomes possessed by an evil spirit and is subjected to an exorcist by two priests.