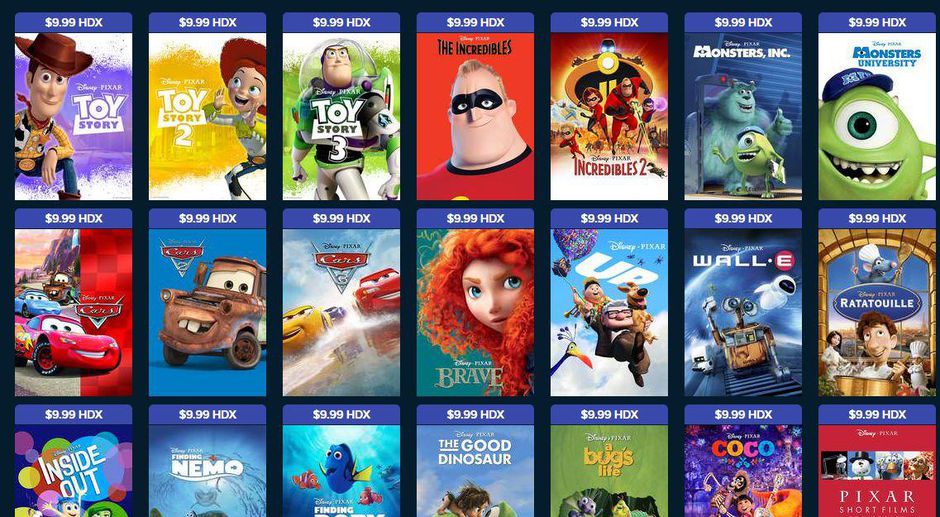 Over the years Pixar has been a company that delivers films not only to children but also impacts adults’ emotions. As a rule, they have consistently delivered good films with a few exceptions. But with 20 films on its résumé, it’s hard to keep making top-notch movies all the time. But Pixar is one of the few companies where the majority of films deliver high-quality entertainment.

This is our top picks of the best movies from Pixar  – In no particular order.

Pixar’s first and so far only movie starring a princess (something Disney is known for). The main character Merida is interesting and as we can expect, we have nice and fantastic animation. But it breaks down in the act when everything is really just a mother and daughter relationship. Even the part with the bear transformation felt a bit odd even for this movie. But an interesting protagonist, lovely animation and a couple of comic pieces mean that Brave is not completely forgotten, but could have been better.

A successor – a prequel movie for Monster’s Inc. This is not an exact successor, but an indirect “follow-up”.  Is it a necessary movie? Not really and the whole movie feels like a plot-hole if you listen to one sentence Mike says to Sully in the first movie, “You’ve been jealous of my good looks since the fourth grade”. But here they meet for the first time at university. With that said, we have to admit that as a pure comedy movie, it’s a movie that will give you lots of laughter.

The Cars movies tend to split opinions. But it has come to become a classic and is certainly worth watching at least once.

The successor to Cars 1 and 2.

This is the first Cars movie which is the best of all three films. While many Pixar movies tend to use adult elements and tell more complex stories. This feels like it is made for the very youngest. Which, of course, there is nothing wrong with.

This film on paper had potential, but unfortunately, it is probably one of the most forgotten films on this entire list. The absolute best thing about the movie is the background animation which is one of the most beautiful ever made. Unfortunately, it doesn’t mix well with the cartoon look that the dinosaurs have. The action has been seen before and it is not that it is bad, but just forgotten and leaves no impression or impact.

Everything is really well done with this movie. The action flows on, the new characters are memorable and certainly, there are somewhat emotional scenes.

A movie that you probably saw when you were a kid. But we should also keep in mind that this was Pixar’s second animated film and in a way, this was also a big investment. It has memorable scenes such as the fake bird attack, how they drink water from bubbles, the circus animals and overall a somewhat scary villain. The music is also iconic.

Up is a really well-made movie It consists of two sad dramatic moments where no dialogues are used both at the beginning and towards the end. Which is also the two best and most memorable scenes in the movie. The adventure is entertaining and the relationship between the older Carl and the young Russell becomes a good mix of chemistry. It’s a really good movie that is definitely worth watching.

One of the newer Pixar films that have become very popular and received good reviews. This is a sweet and lovely story that you just have to love and the music is unbeatable in many ways. The animation is wonderful and colorful and everything just pops. This is one of Pixar’s best movies.

A worthy sequel that will be appreciated by all those who loved the first movie. The comics shine and Brad Bird’s direction shines once again, the man knows how to use the animation and yet mediates his distinct style. Unfortunately, this film also makes “twist”, the villain which means that this one does not really reach the same level as the first film in my eyes. Everything else is at least as good.

Proving to children that one can make a movie that holds the child’s interest without any dialogues for the first 45 minutes is difficult. But Pixar once again shows how to do it. Without a doubt, this is a masterpiece with everything from the story, the animation, the message and being able to convey these feelings with almost no dialogues and with two robots in the main roles.

Here is an idea and action that has already been done before. But where you take the basic idea and make it something unique and unique. The fact that the film is brutally honest with the viewer and shows how important it is with sadness in one’s life and that without sadness we have no joy. It is a very mature message to teach children. For a movie about emotions in the lead roles, there are literally many emotions when the subtitles start rolling.

From the 60’s spy theme and environments and the fact that this family and its dynamics together is really interesting and entertaining, this makes this one of Pixar’s best movies. It’s also the first time people have been the main characters and the main focus of a Pixar movie.

For both a movie lover and a person who loves to cook, this is the ultimate movie. This movie is just a straightforward cozy movie. This one is directed by Brad Bird and is in our eyes his best movie, though it can sometimes vary between this and the Incredibles.

Now the really big nostalgic bells are starting to ring.  This is definitely a memorable and iconic Pixar movie.

This is just a really great, well-made movie. A concept we have seen before, but which Pixar makes its own touch and twist to. The humor is there and the friendship between Mike and Sulley goes beyond appreciating and liking. I will never forget the intro with the jazz music and the various doors.

When it comes to memories, this is probably a great nostalgic movie for you. Comic Relief character Dory works perfectly here and is really funny and the movie knows exactly the kind of amount she needs in front of the camera. But that’s the driving force Marlin has to find his son after everything he’s gone through. It is a good moral for children and one that learns to stay well into adulthood, they have done it on me anyway. For 2003, the animation remains unbeatable today.

Toy Story may very well be the very best trilogy.  You have fantastic characters like Woody who is the ultimate buddy. A story that is designed for each movie and uses Andy’s age for the film’s story. There are also a few sad moments (Jesse’s song in Toy Story 2) These films form the perfect trilogy and have a fantastic ending to everything. What an adventure they offered us.