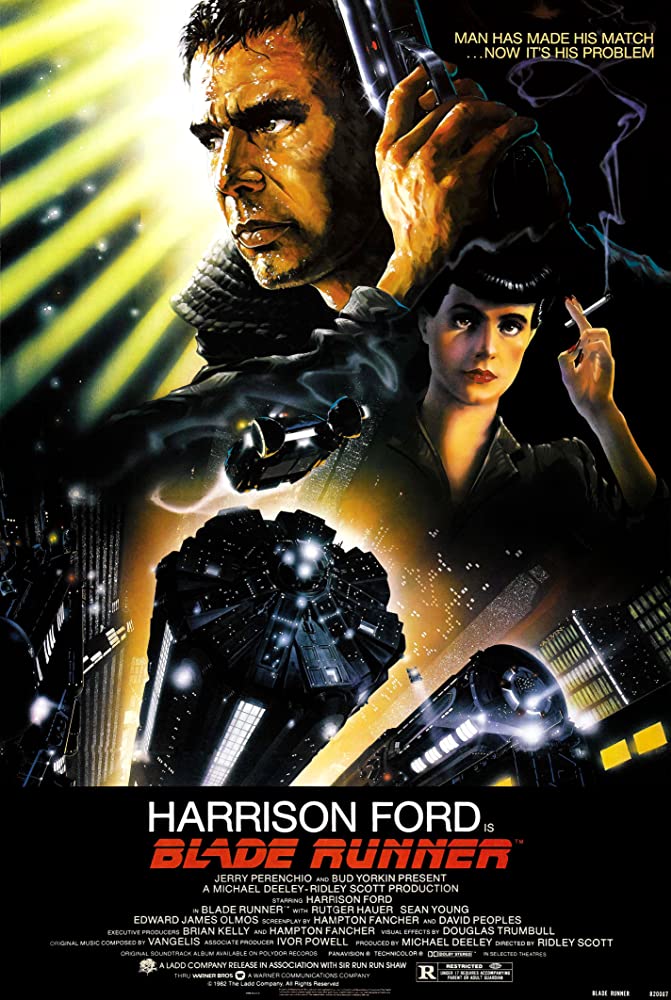 Some believe that art should suffer and the expression can hardly be more fitting than with the movie Blade Runner from 1982. Despite a production lined with quarrels, worries and tasteless authority from director Ridley Scott, the dystopian future world and cover story has high regard among film history masterpieces.

For those who have no idea what Blade Runner is about, the action is fairly straightforward to clarify: The film is set in Los Angeles in 2019 and it is an extremely dark and rainy neon-drenched world that is now ruled by large multinationals

In a future Los Angeles, people live in a dirty and dark world. Replicants, that is, human-like robots, are made to work in space on colonized planets. When these misbehave and ignore their purpose by returning to Earth, “Blade Runners” are hired to hunt and kill them.

Rick Deckard, played by Harrison Ford, is just one. He is ordered to eliminate four replicants, played by, among others, Rutger Hauer and Daryl Hannah, who have hijacked a spaceship and murdered its crew to return to Earth.

Here begins our film-noir-diver who, with a quiet tempo and a confident dark tone, guides us forward. Rick Deckard’s police work is done methodically. He is numb, just like the world he lives in. The plot is complicated when he encounters Rachael, a unique replicant, played by Sean Young, who does not know what she is herself.

But what makes “Blade Runner” so incredibly good?

Everywhere around Deckard is the fantastic future world that will be Los Angeles in 2019. This perhaps makes it even more interesting as we have already passed 2019, but when the movie was made, it felt like a long time in the future. The scenery and props in Blade Runner are as inventive as it is sometimes clumsy. And it works.

The year is 2019 and man has shouldered the ominous cloak of God and created creatures to his image, which rarely goes unpunished in the film world. The result of human hybris is so-called replicants that on the surface are identical to humans but lack empathy. These “skin jobs” serve as slaves under man and are only allowed to exist within the space colonies where humans sought happiness after the earth was overpopulated and shrouded in a curtain of smog and acid rain.
After four replicants rebelled and sought refuge on earth, Deckard is called to “retire” (read kill) the synthetic people. The classic cat and rat game can now begin.

There is social, economic, religious and political collapse, the streets are overcrowded by people; Pollution has meant that light is no longer visible from the sky and the only source of light from there comes from flying zeppelins that promote advertising that falsely promises that dreams exist in colonies in space.

It is suggested that the only activity that man engages in is high-level business, they take place in space and include war and military weapons. In this world, there are replicants – robots so natural that they cannot be separated from people with the naked eye – and among all different models there are war replicants designed for military use; The latest replica model, Nexus 6, has proven to be so technologically advanced that the Nexus 6 replicants have begun to develop their own emotions – love, anger, hatred, envy – which made it illegal on earth.

The protagonist Deckard, played by Harrison Ford, is a “blade runner”; i.e. a police officer responsible of tracking down and killing illegal replicants on earth. The movie is about four Nexus 6 replicants rebelling and now on Earth to live their own lives, and Deckard has to find them and kill them.

In the meantime, however, he himself falls in love with a replicant, Rachel (Sean Young), and in a world where you can’t see the difference between synthetic and biological emotions, the questions arise: How come the replicants show more emotions than the cold people? Are there “genuine” feelings about a computer developing them on their own? And if the replicants themselves do not know that they are replicants – Rachel thinks she is human – how can Deckard himself be sure he is human? And who, or what, is actually “living” to begin with?

The first hint of this well-directed and visually moving mystery moves us to the creator of the replicas, Dr. Eldon Tyrell’s (Joe Turkel) headquarters. Here we meet the assistant and later Deckard’s love interest Rachel (Sean Young), whose acting gives the story an emotional depth and humanity. A depth that we are not spoiled by within the science fiction genre.

The photo is dark, flashing, and magical. Smoke, fog, sweat, and water. No element is forgotten in Blade Runner, but everyone plays their part in the big raw puzzle. Add to that the Greek composer Vangeli’s electronic and mesmerizing music, and one of the most beautiful worlds of film history is created.

The plot is actually quite simple and reminds more of crime movies than science fiction. On that basis, director Ridley Scott then shifts the focus away from the main conflict and asks deeper questions about existence, humanity, and survival instincts. What does it mean to be human and what is really human?

In our modern cinematic landscape where actors feel the need to explain actions in order not to miss any bio-income from an unintelligent individual, Blade Runner is and still is a fresh and unique example of what film should be. Philosophy, learning, provocative, and creative. Ridley Scott’s masterpiece will still be talked about for at least 50 years to come

However, it can be said that the film was actually not a success and many critics did not like it. With narrative voices and a happy ending, Blade Runner becomes a movie about traditional characters in a dystopian world, and then it is legitimate to say that “the characters do not express humanity”.

In addition, it can be concluded that because the film is so incredibly good to watch, it must be that the action came in the shadow of the effects. But in reality Blade Runner is, of course, a movie about dystopian characters in a dystopian world. It was not until 2007 that Ebert acknowledged that the film was a “major work” and about the above quote from his first review he wrote that “there seems to be strange criticism of a film that questions what humanity even means”.