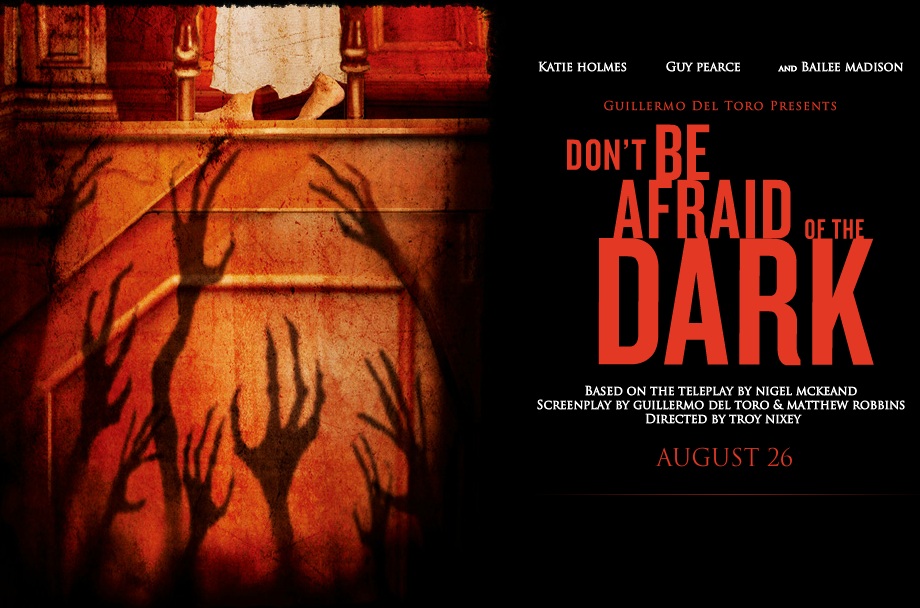 Don’t Be Afraid of The Dark 2011 Movie Review

Guillermo del Toro has written a script and produced this new recording, a modern iteration and remake of a forgotten 70s horror film made for TV.

If you are the one who takes movie titles seriously, then you should not be afraid of the darkness of Don’t Be Afraid of the Dark.

In this Guillermo del Toro-produced remake recording of a little-known TV horror from the 70s, the darkness is definitely the most frightening – and really the only thing that really gives you a couple of chills. The other source of fright is small creatures running around in the dark with jawing baby teeth. Of course, it sounds about five hundred times funnier than the dark itself, but when you see these small creatures running around and whispering like Gollum himself, it’s hard to keep away from laughter.

Guy Pearce and Katie Holmes play a couple who are working on renovating an old house that has a dark secret. That secret is discovered by Pearce’s daughter when she is sent there to stay with her dad for a while. A secret that involves small characters who live in the dark and who, frankly, only shows up for the little kid who behaves as child characters in films often do. She tries to persuade both Pearce and Holmes that it would be best to leave the house, but who really believes in a little kid whose stories sound like they came from an old storybook?

Don’t Be Afraid of the Dark does some things really well – and a lot of things less good. The photo is beautifully retro and the surroundings are really perfect for this kind of horror movie. Large corridors, old creaking doors, dark basements and large gardens filled with secrets. As evocative as possible.

There are also many slow camera rides which are a welcome feature of today’s hot film making. What is not quite so good is much else. The script only works at the beginning of the movie when everything still feels mysterious. But as soon as the little creatures appear, the tension dies. All the mystery and mood that has been built up turns into a slanting Creature Feature.

Pearce and Holmes both feel rather unengaged in their roles, while Bailee Madison, who plays the daughter, is incredibly annoying from start to finish. Don’t Be Afraid of the Dark has a couple of weird jump-scenes and contains a really awkward scene with teeth loosening from a mouth, but otherwise, this is far more elusive than it is exciting.

Don’t Be Afraid of the Dark is a fairly dark movie where many of the scenes take place in rooms where the light sources are limited. Fortunately, the darkness is of really good quality, although in some scenes it tends to smudge out details slightly. The sharpness is also really good with nice fine details and a lovely dynamic. The colors, in general, feel somewhat pale and dehydrated. Noise occurs, but not in any large quantities. The image is coded in AVC and has the format 1.85: 1.

Here, a really quirky and well-made DTS-HD Master Audio 5.1 track is offered that raises many of the scenes with delightful precision and weight in the powerful surround effects. The mix is filled with subtle surround sounds that create an incredibly dense soundscape where the dialogues are well-mixed, just like the music. Maybe the bass could have worked a bit more, but otherwise, this is a really good soundtrack.