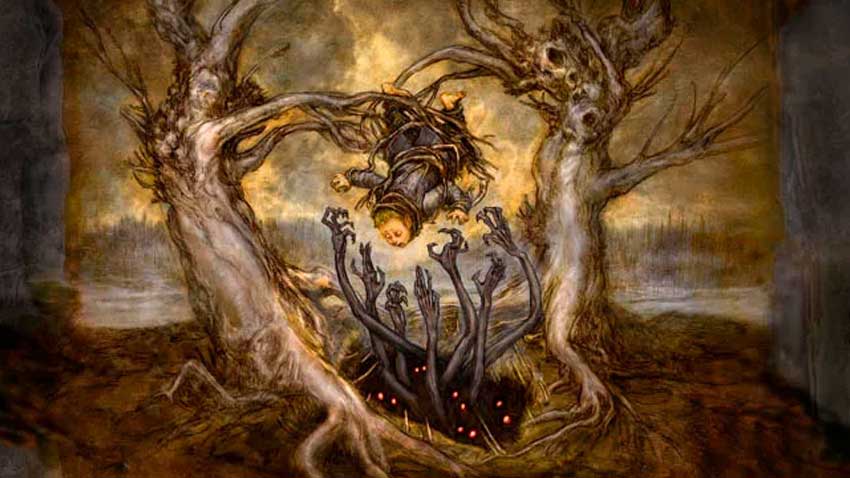 This article explains the ending of ‘Don’t Be Afraid Of The Dark’ from 2010. If you haven’t seen the movie be warned, there are major spoilers ahead.

Well, Kim (Katie Holmes) manages to cut Sally (Bailee Madison) free but she herself gets dragged into the pit.

Bizarrely, Sally and her dad Alex (Guy Pearce) return to the house to leave a drawing on the floor.

Like you’d go anywhere near that place ever again if you managed to get out!

The drawing depicts Sally the child, Kim, and the Koi fish in her favorite part of the house.

This is the place where Kim used the Koi fish to teach Sally that our differences make us special but they can also make us vulnerable and that we need to be tough.

The drawing is carried by the wind, or some magical force, all the way down to the basement where we hear a female voice whispering.

“We will wait, they will forget, and others will come…”.

“We have all the time in the world”.

“All the time in the world”.

What Are The Creatures?

They are dangerous fairies.

Fairies usually have a good reputation but these ones are malevolent.

We know that humans can be transmuted into these dangerous fairies.

In all likelihood, all the little creatures were once humans. Most of them used to be children. This process has been going on for a long time.

And that begs the question…

Who or what is their master, or masters? Who is doing the converting?

We don’t see who or what that is, but at the start of the film, something ascends rapidly from the pit and grabs Blackwood. The fairies need to work using ropes, but Blackwood was just grabbed and pulled down.

The horror movie was accompanied by a graphic novel that you can buy on Amazon.

Check out that cover and those long arms trying to pull the boy into the pit. And the trees are demonic too!

Buy it on Amazon!

So it wasn’t the fairies that grabbed Blackwood. The fairies work for someone or something else.

And the boy that is being pulled into the pit is probably Emerson Blackwood’s son. That’s why Blackwood paints the mural in the basement.

We learn a lot about what the creatures are in the scene with the librarian (James Mackay).

Before his disappearance, Blackwood had been researching, drawing, and writing about the fairies.

The librarian explains that Blackwood had quoted a lot from Arthur Machen.

In real life, Machen is the pen-name of Arthur Llewellyn Jones, a Welsh author and mystic of the 1890s and early 20th century. Most of his notable work is in the supernatural and fantasy genres.

Machen, the librarian explains, “believed in fairy folk, these ancient entities from the netherworld, predating mankind”.

So these fairies are creatures from hell, and they work for something that lives down in the pit.

Here is the painting by Blackwood from the graphic novel. We can see the mansion house in Rhode Island, the basement, and the creature’s lair.

You can see the shadowy beasts that are pulling the body down into the pit are not fairy-sized. These demons are larger and they have long arms.

These demons live down amongst the roots of the trees. They are the dark forces of nature, a nature that must destroy in order to create.

In the film, Kim sees this painting at the library and learns, “One life must be taken”.

“These creatures had to take one human life every time they emerged to replenish their ranks. Many of these creatures fed on the bones, the teeth, of young children.” explains the librarian.

“And then there’s a truce, a pact of sorts, between Pope Sylvester II and these ancient beings in the year 999.”

“In exchange for human teeth, they start leaving silver pieces under the pillow.”

They are not just dangerous fairies from hell. They are tooth fairies and they work for or with demons that live deep down in the pit.

Did Kim Become A Creature?

Yes! It’s clear that Kim became one of the creatures.

It’s Kim’s voice that we hear whispering at the end, and she has clearly switched teams.

It’s not the first time this happened either.

Remember this guy from the start of the movie?

That’s Lord Blackwood. He also gets pulled down into the pit when the creatures are not happy with his offering of adult teeth. They only want to eat children’s teeth.

That’s the little homunculus that Sally squashes with her torch.

This one is also taller than the other creatures. That’s probably because Blackwood was taken as an adult and the others were all taken as children.

In fact, this could be Blackwood with his arm around his son.

It’s clear that humans that get dragged down below are changed into the fairies.

And we can be pretty sure that’s what happened to Kim!

Remember that Sally is a special kid.

She is on “Adderall I think” according to her father who doesn’t even know what medication his daughter is using.

Her mother gives her away and isn’t interested when she calls.

When Kim talks about the broach she received as a gift from her mother Sally replied “my mom gave me to my dad”. That’s messed up.

Her father Alex is disengaged. He struggles to connect with her. He is overly stern. He’s more interested in his work.

The fairies pray on Sally’s fears, “they say my parents don’t love me” she tells the psychiatrist.

“There is a lot of anxiety in that little girl, and a deep belief that she is not wanted.” explains the psychiatrist.

The demons come into her life because of that anxiety. Her desire to love and be loved is what makes her vulnerable. Like how the beautiful colors of the Koi make them vulnerable.

The beautiful nature of Sally, her wish to love and be loved is her weakness. If you mistreat your kid and don’t show them enough love then demons will show up!

“Don’t Be Afraid Of The Dark” means you shouldn’t let your insecurities grow and become demons.

Kim taught Sally that, and she taught her about real selfless love.

She was the only one that believed Sally and was looking out for her.

She knew Sally was telling the truth when she saw this drawing:

Because it was so similar to that drawing by Blackwood:

Kim sacrificed herself to save Sally. Kim came through for her in a way her parents never did.

“When I cut this rope Sally you run!!”

But now Kim has been turned into one of the fairy creatures just like happened to Blackwood.

She is now hiding and waiting down below behind the fireplace for the next time the ash pit is opened.

She’s working for or with those demons with the big long arms and long fingers.

The bank forecloses on the loan and the property goes on back on the market.

Sooner or later someone else will come along and open up the sealed ash pit.

I’d have liked to see a Don’t Be Afraid Of The Dark 2.