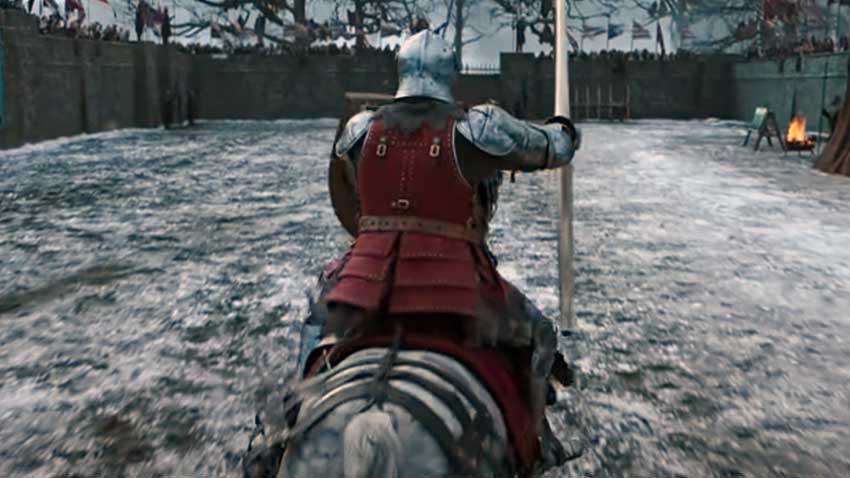 This post assumes you have already watched The Last Duel. If you haven’t seen it be warned, explaining the ending obviously involves a lot of spoilers so go watch the film before reading further.

Jacques Le Gris (Adam Driver) lost and was killed by a nasty dagger in the mouth.

But then this movie was never really about the duel.

Jean was not a hero and Marguerite certainly wasn’t saved.

The film is a lot more complicated than that.

What Is Trial By Combat?

The movie is set against the backdrop of this irrational judicial method.

The belief at the time was that since God is righteous and perfectly just he would never allow one of his creatures to be victorious in battle if they were lying.

Only a man telling the truth would be allowed to win a duel by God.

Hence trial by combat “proved” the guilt or innocence of the knight or squire.

If Jacques Le Gris had won the judicial duel then it would have “proven” that Marguerite De Carrouges was lying about the rape.

Since Jean De Carrouges won the duel it was “proven” that he and his wife Marguerite were telling the truth.

While trial by combat was certainly a way to settle disputes, it’s hard to argue that it’s a good way to get to the truth.

This Movie Is Partly About Cultural Change

Trial by combat was coming to an end in the middle ages. That’s why it’s the last duel.

Society was moving on. Progressing.

It’s apparent from our modern vantage point how bizarre and brutal the old judicial process was and how society can change for the better.

That “truth” in a court case would be decided by God’s will and a couple of guys with swords is absurd from our modern point of view.

But the main battle of this movie doesn’t take place in the jousting arena between the two men.

There Are Two Battles In The Movie

One battle is Jean De Carrouges vs Jacques Le Gris. The duel. It provides the action fight scenes to get the pulse racing.

But in a way the duel is just two men having a pissing contest. It actually has little to do with the rape of Marguerite.

“I am risking my life for you” Jean tells Marguerite.

But she sets him straight.

“You are risking MY life so you can fight your enemy and save your pride.”

Jean is not primarily motivated by the welfare of his wife. The fact that he pursues the duel puts her life in grave danger and he knows it.

On a deeper level, the second battle and the main focus of the film is Marguerite vs The Patriarchy.

And frankly, she does not stand a chance.

At every step of the way Marguerite is up against a culture with a powerful hierarchy that prevents her seeking justice.

She cannot even protest without the support of her husband.

“I intend to speak the truth. I will not be silent” says Marguerite to Jean.

“I have no legal standing without your support.”

There is not a single character in the movie that openly supports Marguerite. Jean’s support is open but his motivation is to pursue his own agenda against his enemy, not to support his wife.

The church are no help either.

If Jacques had wanted to avoid the duel he could have simply asked to have been tried by the church instead of the state. But he refused that way out. Again, the duel had little to do with the suffering of Marguerite. It was a pissing contest. It was a power struggle between two men that didn’t get on.

“This is not a matter over which a duel should be fought to the death. It should be settled quietly.”

And those in government were no help either.

When the charge is first brought by Count Pierre d’Alençon (Ben Affleck) to Le Gris his defence was that she may have said no but she meant yes.

“Of course she made the customary protests but she is a lady. It was not against her will”

Jacques only needs to say that ‘she was up for it’ and that’s good enough for The Count.

He advises Jacques that since “the common mind has no capacity for this sort of nuance” he should “deny, deny, deny… it never happened… there is no proof”.

“A verdict will be rendered by your overlord adjudicating this matter who as the fates would have it happens to be me!”

Later as Count Pierre d’Alençon attempts to quash the case we discover that Jean De Carroughes has escalated the matter by going direct to the king and requesting trial by combat.

But it’s not only the men that are against her.

Her best friend Alice gives evidence against her.

Her mother in law, Nicole de Carrouges (Harriet Walter), does not support her either.

“Marguerite. Why have you done this?”

“The truth does not matter.”

“There is only the power of men.”

“You look at me as if I were never young. I was raped.”

Nicole de Carroughes stayed silent after her rape. She survived, but she paid a cost for that.

The cost of staying silent vs the cost of speaking out is one of the central themes.

Marguerite Does Not Win

After winning the duel Jean shows off Marguerite to the crowd like she is some kind of prize. Marguerite audibly gasps as Jean grabs her wrist spinning her around.

Jacques Le Gris may be dead but Marguerite is still Jean’s property.

Jean and Marguerite make their way through the crowds to give thanks for the victory at Notre Damn cathedral.

Only the husband was victorious.

Jean is surrounded by cheering crowds, he is patting babies on the head. He has become a celebrity.

In the second last scene we cut to Marguerite and are given a slow-motion silent shot.

Even though Le Gris was killed, Marguerite has not won her battle. She has endured it.

Has the treatment of women in rape and sexual assault cases sufficiently moved on since the medieval ages? That’s the central question of this film.

This movie project came together shortly after the #metoo movement. Even though it was set hundreds of years ago it speaks about injustice in the modern world.

What’s With The Three Perspectives?

Did you notice when the title for chapter three faded out for a second the words “The Truth” were left on the screen?

And then fades to this…

While we learned that the perspectives of De Carrouges and Le Gris were flawed and biased, we are told to believe that Marguerites’s perspective is wholly accurate. The blunt message of this movie is to believe women.

From Jean’s perspective he believes his wife wants vengance.

“Jean. I want him to answer for what he has done.”

That line is missing from Marguerite’s recollection.

“Can he not simply be tried for his crime in the courts.”

“I will not appeal to the king. I will appeal to god.” replies Jean.

Jean is railroading his wife’s rape. He’s making it all about him.

Marguerite is a thoroughbred horse that has been mounted by a non-pure stallion. Her role is for breeding.

Jean’s initial reaction is to doubt his wife.

“Are you telling me the truth?” He roars with his hand around her throat.

“I am telling you the truth. You must believe me.”

“I was pinned down I could not breathe,” says Marguerite as her husband also throttles her.

We are clearly supposed to see there is not such a big difference between Jean’s aggression towards his wife and how Jacques Le Gris assaulted her.

When Jean accepts that the rape has taken place his first reaction it to see it as an insult against him.

“Can this man do nothing but evil to me?”

Marguerite replies “I intend to speak the truth. I will not be silent.”

“I have no legal standing without your support.”

“Then you shall have it.” answers Jean.

But he then insists that Marguerite have sex with him.

“I will not allow him to be the last man who have known you.”

He cuts off Marguerite’s protests.

Immediately after telling her husband she was raped Marguerite is ordered to have sex when she doesn’t want to.

Her protests are simply silenced. “Come!”

She complies but it is made clear to us that she is not enthusiastic and does not have much choice in the matter.

Was that another rape? I’ll let you decide.

But if Marguerite does not comply she will not have the support of Jean and will have not legal standing.

In the final scene of the movie Marguerite sits under the tree. Her son takes some of his first steps. It’s a scene of joy, Marguerite is happy.

But there is also a look in her eyes, she is lost in thought, she knows one day her little boy will grow up to be a man.

Trial by combat is something that has been consigned to history. We have moved on from those backward ways. These days, the accused is now entitled be tried by a jury of his peers.

After the birth of her son Marguerite comes to understand doing what is right has a high cost.

“What you did was right” Jean tells her.

“Not if I die” she answers.

Whether it’s the 14th century or the 21st century, if the cost of doing the right thing is too great victims cannot come forward and justice cannot be enacted.